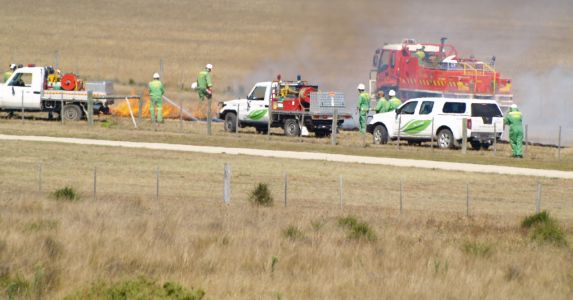 
CFA brigades conduct planned burning which reduce fuels to minimise the impact and spread of bushfire.

What is planned burning?

A planned burn is the controlled use of fire under carefully managed conditions to reduce fuel such as dead wood, leaf litter, bark and shrubs.

Why do planned burning?

Reduced fuel decreases the impact of bushfire by lowering the intensity of a bushfire. Low intensity makes it easier for fire-fighters to control a bushfire.

Fuel reduction is conducted at a board scale remote from settlements to reduce embers that on bad fire days start new fires some distance away from the main fire (up to 36 kilometres). This fuel reduction slows the rate of spread of a bushfire. It also increases the likelihood of suppression at the early stage of a bushfire.

Fuel reduction within 150 metres of a house significantly increases the likelihood of house survival by mimimising the impact of radiant heat and ember attack.

Burning is also used by land managers to maintain the health of plants and ecosystems that need fire. For more information on fire and ecology read the topic Sustainable Fire Management.

Under severe bushfire conditions the effectiveness of planned burning reduces and the risk to life and property increases. Community members should prepare and maintain thier property and manage vegetation to help reduce the risk around their homes and assets and act on their personal bushfire survival plan.

Who does planned burning?

Planned burning on public land including National Parks, State Parks and other crown land reserves is done by Department of Environment Land Water and Planning (DELWP) and Parks Victoria. For more information go to the DELWP and Parks Victoria websites.

Private land and other reserves

Planned burning is conducted by CFA brigades on behalf of and at the request of private land owners or managers of other reserves such as roads rail corridors, council reserves and water authority land.

How is planned burning done?

When is planned burning done?

Planned burning can only be done in very mild and stable weather conditions. These conditions occur in a narrow weather window of five to eight weeks a year in spring and autumn. Check planned burns now and next ten days.

Want to know more about planned burning in your area?